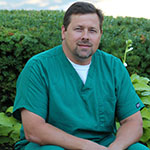 Rick’s Story
A False Start
Rick Neal first enrolled in college in 1988. He found himself in a sea of students – just one of many. “I had a textbook and a professor who lectured once a week and in most cases did not take an interest in me personally,” stated Rick. “I left after two years and never got a degree.”

Recession Leads to Finding Passion
A self-proclaimed people person, Rick spent the next twenty years of his professional career in various sales roles. But when the company he and his wife worked for went out of business in 2007, he realized that education would be the key to his future success. “I wanted to learn something that would help me impact the lives of others in my community,” said Rick. “I thought nursing would be great for me but was hesitant because it was traditionally thought of as a woman’s profession. A good friend of mine heard that I was considering nursing and offered me a position as a Nursing Assistant. I found out right away that caring for people, in any capacity, is not gender specific. It was a perfect fit for me.”

A Second Chance
Rick enrolled at Schoolcraft College because it was local and affordable. As a married father of four, deeply impacted by the recession, that was important. “I stayed at Schoolcraft,” said Rick, “because my professors are interested in seeing me succeed.”

Donors Making a Difference for a Family
As the recipient of the 2013 Foundation Scholar Award, Rick is grateful to those who support the Schoolcraft College Foundation Annual Campaign which helps fund student scholarships. “Attending college later in life presents many different challenges,” said Rick. “At a time when I should be working two jobs to make ends meet, my wife and kids have made many sacrifices for me to go back to college to pursue my dream of becoming a Critical Care Nurse. This scholarship means that my wife can focus more on our kids and worry less about paying for my college expenses.”

The Best Gift
Rick believes that his going back to school has allowed his children to see firsthand how taking education seriously, being a good person, and a productive member of his community results in many blessings. “I tell my children that the best gift you could give yourself is an education,” said Rick. “It is important to take advantage of every learning opportunity. I also hope I have shown by example that it is never too late to learn new things.”